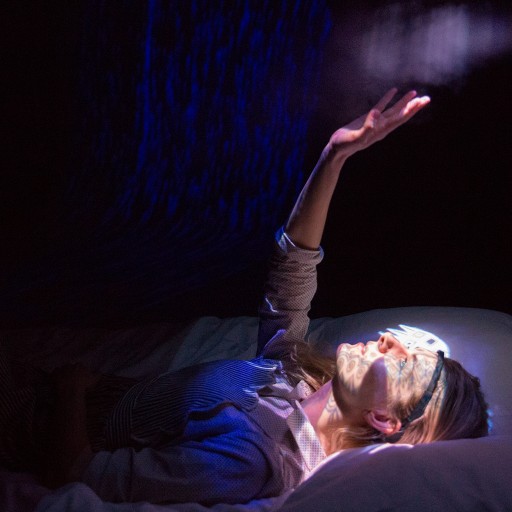 For digital artist Jennifer Greb, immersive artwork means more than just compelling imagery or a good story. Through combining computational methods with art and media production, she has created visual worlds that invite audiences inside. Sometimes these worlds are physical spaces where viewers are literally surrounded with art, while others are more metaphorical, like museum collections and archives that aren't otherwise accessible. Jennifer makes these spaces interactive, immersive, and beautiful.

Part of Jennifer's recent work has focused on immersive art experiences that use fulldome projection, creating a hemispherical screen that surrounds viewers and allows them to feel as if they are a part of the art. To fill these 360° displays, Jennifer turned popular pieces like Monet's The Water Lilies, Hokusai's The Great Wave off Kanagawa, and Rousseau's The Dream into shifting scenes with calming animation, mapped to the fulldome screen using Vuo.

According to her M.A. thesis at Aalto University (Finland), Jennifer used animation to "subtly mimic the natural motion of the object which the original image aimed to represent," returning life to still moments from each work of art. Doing so allowed her "to further the link with the original natural environment by adding elements and simulations that were not native to the artworks, such as rays of light, water particles, fog, and dust" and to imbue "the two-dimensional artworks with a sense of space and atmosphere." Adding to that sense are ambient soundscapes created by Sharif Jamaldin. Stepping into the dome theater gives the impression of entering into these works of art.

Not only did Jennifer help create a truly immersive art experience, but she did so in a way designed to be approachable for creators. Relying on copyright-free images, Vuo Community Edition, Omnidome, Touch OSC, a kit from Build with Hubs for the prefabricated fulldome hardware, and even broom handles, Jennifer created an unforgettable experience with limited expenditure.

Jennifer shared some of her fulldome media experiences with me, diving into the details of how audiences interact differently with the unique format as well as how difficult these installations can be to bring to production. She also discussed how her work has drawn on historical themes and relies on exploring computational and artistic practices, bridging gaps between archive and audience as well as artist and algorithm.

What makes fulldome productions different from other media experiences?

Fulldomes can offer an unparalleled sense of immersion through their all-encompassing, hemispherical format. Seamless fulldome projection creates an intense experiential space that dissolves physical and virtual boundaries and facilitates presence in another world. A unique paradigm exists in this medium where the environment moves instead of the visitor. The visitor does not walk around to observe the media from various viewpoints; rather, the imagery comes to the visitor from all angles. Moreover, the lack of a traditional screen and frame means the audience does not watch the content; they experience the environment personally.

What concerns exist for making the fulldome medium accessible to creators?

Fulldome theatres and media installations vary greatly in size and cost, but installations that require multiple projectors can become exceedingly expensive. Due to the high cost of producing both the theatre and immersive fulldome content, the medium can be intimidating and inaccessible to independent creators. This factor is unfortunate because fulldomes have so many incredible and unique affordances.

Another challenging factor is personnel. The production of a fulldome film and the construction of a fulldome theatre requires specialized skills, including 360-degree production, projection mapping, and blending, and construction. Paying for a team of designers and engineers is costly. There is also a need for facilitators and staff to upkeep and monitor audiences after the fulldome is produced.

Similar to cost, issues of space needed to house a fulldome theatre can provide constraints. The room that a fulldome theatre is housed should be large and ideally devoid of external light and sound. While fulldome installations can also be exhibited outdoors, weatherproofing and security need to be considered.

What role does Vuo play in your work, research, and in increasing access for creators?

When creating a fulldome media environment for my M.A. thesis, I investigated several production methodologies and software that could be utilized to create and play back fulldome media on a modest budget. There are a variety of software solutions available for fulldome media playback, but their costs can vary greatly and often be unattainable for independent artists and smaller institutions. What I greatly appreciated about Vuo is that my composition was able to be executed using the Community Edition, which is available free of charge. This factor allows more artists to access tools that can effectively create interactive and immersive content.

I employed Vuo in a variety of ways. First, I utilized the software to play back various animations with a cellphone application. Additionally, I used Vuo to map the animations to fit the half-sphere shape of the dome and send the animated frames to a projection mapping software. Moreover, I experimented with real-time image manipulation of the fulldome animations.

The layout of my Vuo composition for this project is as follows: The composition starts by listening for an OSC message. Each button on the cellphone application corresponded to a different animation organized as a list. Once an OSC message is received, it triggers the retrieval of a specific animation from the list. Subsequently, each frame plays back as an image shader on a half-sphere, which corresponds to the shape of the physical fulldome environment. This 3D object is then rendered to an image frame, which is sent via Syphon to a projection mapping software.

A lot of your work has focused on historical subjects and themes — what’s it like approaching these topics with modern tools of art and design?

As a digital artist, I have primarily worked on projects with museums and educational institutions. The majority of museums' collections are hidden from the public and there is not sufficient physical exhibition space to present the works. I am very interested in understanding how we can utilize digital spaces and interactive mediums to showcase collections, educate, and promote emotional resonance between archival imagery and the viewer.

Not only do virtual environments drastically expand the exhibition space, but they can also imbue the experience of artifacts with layers of information and narrative that aid the audiences’ understanding and personal engagement. Utilizing methodologies within filmmaking, web design, and immersive virtual environments can aid in substituting passive observation of an artifact for the facilitation of an intimate and personalized experience of historical themes and imagery. This pursuit can allow greater accessibility to museum archives, promote interest in historical themes, and provide a more inclusive and engaging interaction with a museum's collections.

How does your artistic work — photography, illustration, animation — inform your computational work — coding, web design — and vice versa? Do you try to focus on projects that combine these skills?

From a young age, I loved drawing and found myself aiming for photo-realistic illustrations. It was not satisfactory to sketch an idea; I wanted the image to feel alive. When I discovered photography, I soon became interested in the relationship between sequential photographic frames and how motion could be employed to create dynamic artistic narratives. I see the utilization of coding and interactive tools to be the next step in resurrecting imagery from a static 2D orientation and instilling images with an aliveness.

There are many intersections between artistic and computationally-driven work. Principles found in traditional visual arts like composition, color, movement, and lighting also apply to visuals mediated through a computer. Moreover, I believe artists to be infinitely curious and constantly pursuing novel ways to approach problems, which is a mindset shared with programmers. I enjoy learning new methodologies and pursuing projects which explore how images and stories can be expressed and understood through the convergence of artistic and computational practices.

Now that you’ve finished your thesis, what’s next?

I am currently participating in a fellowship at ZKM | Center for Art and Media Karlsruhe [Germany] and am aiding them in recreating a past exhibition in an immersive 3D virtual space. I hope to continue collaborations with museums and educational institutions that aim to produce impactful media and storytelling experiences that blur the boundaries of virtual and physical exhibitions. As an artist, I want to perpetually learn and investigate new tools that empower more people to engage with history and art.