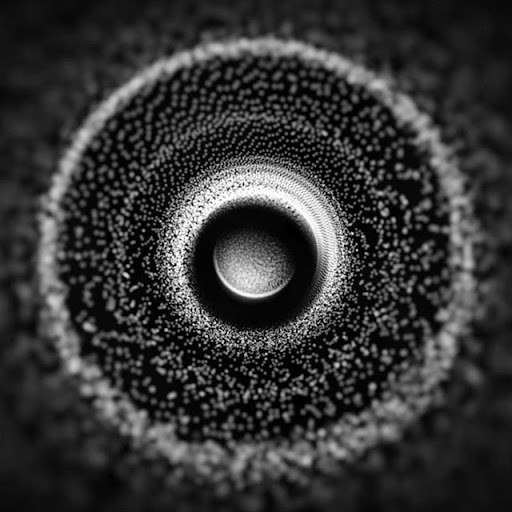 London-based audiovisual artist Joëlle Snaith has been enthralling audiences around the world with her experimental real-time visuals and live performances. Her art focuses on bringing in-the-moment emotions to life — what she calls "exploring the connection between what I'm hearing, feeling, and seeing." The end result is a unique moment and process, captured in her visuals.

Part of what enables Joëlle's work is her use of Vuo to create these visual soundscapes, allowing her to adapt and iterate over computer-generated images based on preset rules and improvisational responses to truly capture the emotion of the moment. Her work has touched on everything from anxiety and unease, represented through distortion, to the unceasing tension of exploring the void of space.

Joëlle shared with me how her creative process is informed by her experience with user interface design. Integral parts of this process include real-time creation, exploration, and even accidents. She also discussed how she hopes to use the connections she creates between music and visuals to help people connect — to art and technology but also to each other.

What role does Vuo play in your work and your creation process?

My approach to creating tends to be very serendipitous and experimental. Vuo is crucial in providing an environment that allows for play and experimentation where I’m able to develop artefacts quickly and iterate through a process of exploration and learning.

The audio is almost always the starting point in my work — the first input to inform the path forward. I use a set of nodes that enable me to target frequency bands and then use the frequency data to drive animations and link those data values to various parameters or properties. A big part of how I work involves connecting different properties to audio and seeing what emerges on the other side.

Especially in the early stages, I like to give a lot of control to the machine. I’ll set up some rules where I tell Vuo to do something depending on the frequency band and also depending on the loudness of a specific frequency. From there, usually a series of accidental moments unfold, these happy accidents that I’ll discover and uncover when I’m immersed in a creative flow. There may be a seed of an idea but that seed grows throughout the process and is very much informed by what looks or feels right with the music.

I find visual programming a lot more natural than looking at lines of code. Somehow, when I’m connecting nodes together, I usually seem to find my way out of a mistake, which can often be so paralyzing with text based programming. By nature, Vuo encourages you to try new things in a drag-and-drop kind of way and often I’ll end up down an unexpected path due to the affordance given by the UI and the way that it’s been designed and built.

How did your switch to Vuo change the way you visually communicate?

I used to use Quartz Composer to create my visuals but ultimately had to move on as it’s been deprecated by Apple and is no longer a viable option. Vuo has a lot of the things I loved about QC, such as the visual programming interface and the integration with VJ apps like VDMX, but it’s efficient, has more features, and, importantly, it’s actively developed. It’s awesome to see how new features are developed based on community input. Thought and attention has also been given to the UI so that it’s intuitive and easy to use. I think Vuo strikes a good balance when compared to a lot of the other tools out there in that it’s great for someone just starting out as well as for those who are more advanced.

The Vuo community is really friendly and supportive and there is always someone willing to answer questions or share example compositions to help with a particular problem. I’m grateful for the generosity of those contributing to the discussions and am endlessly inspired by the compositions and nodes that are shared to the gallery.

It feels like the only limit to creating is my own (lack of) knowledge and that if there is something I want to achieve, there is an army of people there to help me achieve that goal. I feel energised by the community and being able to vote on feature requests means I can play a role in the software development, which is empowering.

Do you design your visuals to tell a story or capture a mood/moment?

It’s less about storytelling and more about capturing a mood or emotion in the moment. I try to communicate the feelings I have when I’m listening to music and create a connection between what I hear and what I see. Ultimately, my goal is to take the viewer or the audience on a journey that aims to heighten their experience of the music rather than distract from it. All my work features forms synchronized to audio with the goal of amplifying the details within the frequencies — I want to create an atmosphere with sound and visuals where it feels like they belong together.

How does producing live visuals differ from creating videos, both in your technical set-up but also in the final product?

Once I started learning creative coding and discovered real-time visuals and live performance, it changed my approach a lot as I could be more spontaneous and react to the music in the moment, almost like I’m playing an instrument.

The workflow completely freed me from keyframes and the concept of a timeline with a beginning and an end. I found this very liberating because I could make small changes to the code and get a completely different outcome each time and, importantly, it was quick to get these different results. I also think there is something about imperfection and improvisation in live visuals that lends itself to creating something that you wouldn’t have expected. The process feels more natural and fluid to me and I like that I don’t have to preview or render a timeline in order to see the final output.

If the final output isn’t live, such as a music video or visuals to promote an event, then my process is very similar but with an extra step of capturing and editing. I’ll create the visuals in Vuo and, if the project requires it, I’ll load the Vuo compositions into VDMX. I use Lemur for iPad as a touch controller so typically I’ll have a bunch of parameters and effects that are MIDI mapped to sliders and buttons so I can manipulate and control what the visuals are doing in real-time. This is alongside the more automated audio-reactive elements that are programmed to run on their own based on the frequencies coming in.

I’ll then capture the VDMX or Vuo output with my Blackmagic Video Assist, so I usually end up with a couple of takes in the form of screen captures and then I’ll do a relatively quick edit in Premiere to create the final video.

Other hardware I use is an iConnectMIDI2+ to create a cabled MIDI connection between my laptop and iPad and, if I’m performing live at an event, I have a Steinberg UR12 soundcard to control the volume of the incoming audio signal.

How does your experience with UX inform your relationship with your art and, specifically, the tools you use to create it?

In UI & UX design, you’re thinking a lot about the end user — what’s important and valuable to them and how your designs can help them achieve what they need to do in the easiest and most intuitive way within a given set of constraints.

This has been important in terms of developing my aesthetic. Restraint & minimalism are very present in my work as I’m constantly stripping back and questioning if an element needs to be there. I love the spaces in between sounds, the quiet moments between the loud moments — maybe comparable to white space on a page — and finding a way to balance restraint with intensity while bringing attention to the small details is definitely influenced by my design background.

As a digital product designer, I’m hyper-aware of good and bad UX. The focus needs to be on creating rather than grappling with a user interface, so I appreciate when software pays attention to details and understands the user’s intention and what they are trying to achieve. It’s a deciding factor when using any software, I suppose — how efficiently can I work, and how much care has been taken to help me achieve the work.

Some of the details that I love are being able to colour-code nodes or choose if I want a line or point grid in the Vuo Editor. Hiding cables is a feature I use a lot as it reduces the amount of visual noise, which helps me organise my thoughts better. The documentation is also really thorough, well-designed, and easy to read.

What’s on the horizon, or what’s something you’ve been interested in exploring through your art that you haven’t yet had the opportunity to?

This year I’d like to focus more time on developing my works & presence in the Crypto Art scene. I launched three NFT’s on SuperRare in 2020 and feel very excited about this new avenue to generating income and creating value for digital artworks. I have a few collaborations with FOLD in London waiting in the sidelines and hope that sometime in 2021 we’ll be back in venues again, exploring ways that music, art, and technology can create experiences that allow us to escape into a different dimension and connect with one another.

I’m also keen to develop a workshop or course around creating live visuals with Vuo. Lastly, I want to start integrating light and lasers into my work by collaborating more with light artists as well as increasing my knowledge in these areas.

Author's note: Some of Joëlle's art and process have been included in the upcoming book The Age of Data. Through its explorations of data-driven art, The Age of Data presents 40 stories of artists integrating analog and digital methods, including Joëlle's work on creating these unique, immersive art pieces.

Wow, Joëlle! your work is so good. Love how you capture the feeling of the track with the sync / live timing. brilliant.