Hey, it's Travis from Team Vuo. Lots of cool things have been happening since our 0.8 release:

CoGe has released a public beta with experimental support for Vuo compositions! CoGe allows mixing and compositing inputs from a variety of sources, including Quartz Composer, Syphon, and live cameras — and now adds Vuo to the mix.

Here's a video of Vuo + CoGe in action: 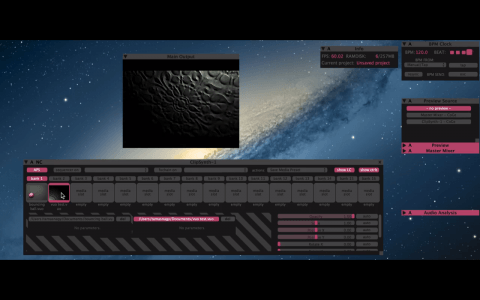 Here's a shot of a composition that GeorgeToledo uploaded to the Composition Gallery: 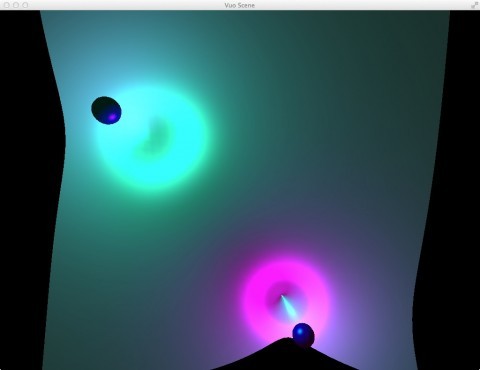 We're excited about all the creative work being posted in the Composition Gallery, and we'd like to see more! From now until our release of Vuo 1.0, any Vuo user who uploads their first composition to the gallery will automatically receive 1 free credit! (And we've retroactively awarded a credit to everyone who's already shared a composition.) 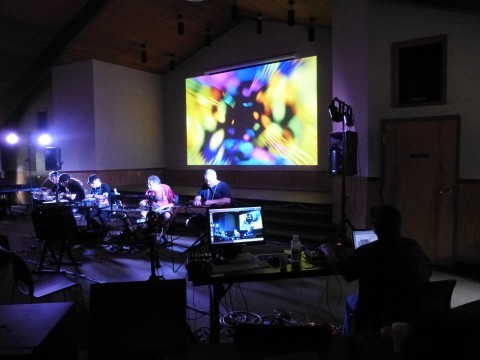 Earlier this month, Melissa, Jaymie, and Steve from Team Vuo got to improvise with Vuo in collaboration with some great electronic musicians. At the electro-music 2014 festival in Huguenot, New York, USA, they volunteered to VJ for several performances, including Adventures in Sound and Legoland Empire. Using Vuo, along with a fader controller and audio input, they projected visuals to add an extra dimension to the musicians' performances. 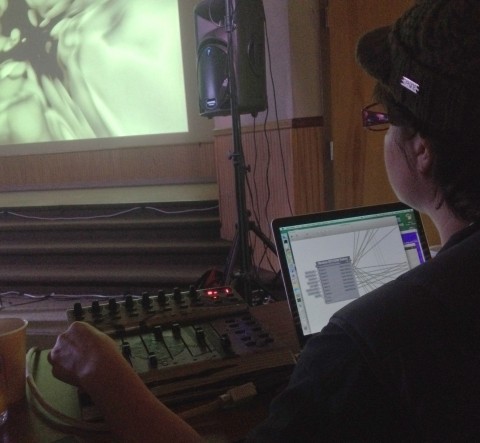 Melissa, who is brand new to the VJ scene, reflected: "I was surprised by how easy it was to quickly create and adapt visuals to complement the music we were hearing. We've been working on some new features for Vuo 0.9 that I think have led to a breakthrough in what can be accomplished using Vuo. First, a new family of random number generator nodes makes it easy to create art that takes on a life of its own. Second, the new collection of nodes for the BCF2000 controller allows you to manipulate the parameters of your composition using the convenient interface of a hardware fader controller. This makes it easy to adapt to changes in the environment, like mood changes in the music. The combined ability to create living art and to easily harness and guide that art opens up a whole new realm of possibilities! I'm excited to imagine what I might get to use Vuo for next." 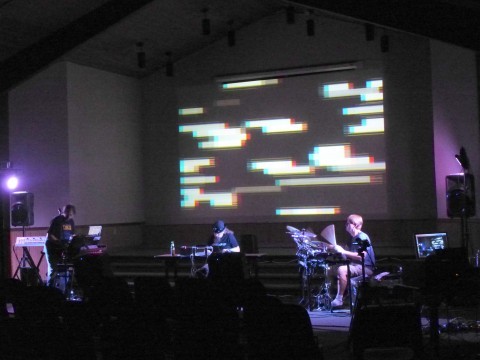 Jaymie told me how much she enjoyed visualizing music with Vuo. "Vuo has a ton of new nodes since the last time we did live visuals. It was fun being able to pick between so many graphics effects." 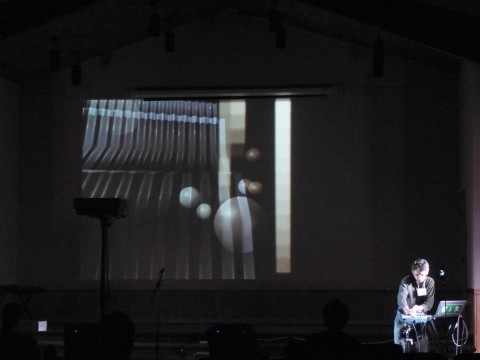 Steve said, "Vuo has come a long way in the last few months. When I'm making an audiovisual performance, I can now use Vuo for everything that I used to do with Quartz Composer. And our experience of using Vuo in the field at the electro-music festival has generated a lot of new ideas for improvements we can make."

This is the last week to help fund feature requests that will make it into Vuo 1.0! If you want a feature in 1.0, it needs to be completely funded by October 5th. After that, we'll implement crowdfunded feature requests as soon as possible after Vuo 1.0.

Check out some of the top feature requests:

Pledge your credits to help make them happen!

Thanks so much for your continued support. What you've all been doing with Vuo 0.8 has been exceptionally encouraging, and we're excited to be working on 0.9!

As always — We look forward to seeing what you create!