Anthony Gene Guterac picked up Vuo quickly. Just a few weeks after he started using Vuo, he was performing a VJ set with it at Sónar 2015. In his Vuo composition, Anthony combined Leap Motion and live audio input with VJ SATOSHI's particle emitter. He hooked all that into the rest of his VJ rig using Syphon. Congratulations to Anthony on an awesome performance! 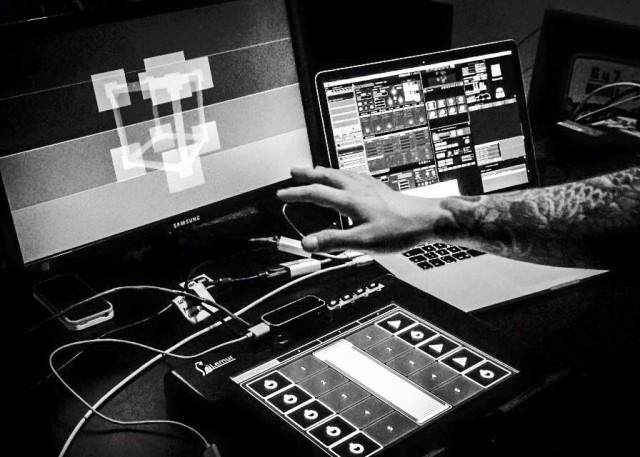 Micropayments for your compositions

Micropayments through Flattr and Paypal are now supported on vuo.org. Once you've enabled micropayments for your vuo.org account, anyone can say "thanks for your awesome work!" by clicking a button that appears next to your compositions and profile and sending a little money. For instructions on setting this up, see the FAQ. 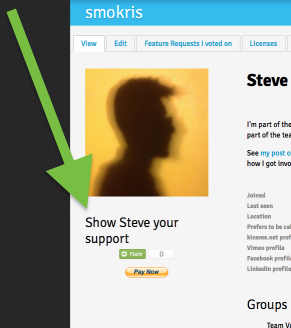 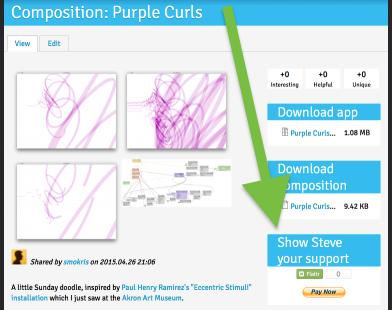 Tip: When to use the Curve, Wave, and Smooth nodes in animations

If I want to gradually move an object along a straight line from point A to point B, my go-to nodes are Curve, Wave, and the varieties of "smooth": Smooth with Duration, Smooth with Rate, Smooth with Inertia, or Smooth with Spring. But which one to choose?

When moving an object in a springing or bouncing motion, the obvious choice is Smooth with Spring.

When moving an object repeatedly along a path, I'll choose Curve or Wave, depending on the type of motion I want. Curve works with easing curves, and it can repeat in different ways: looping or mirroring. Wave works with wave functions. Sometimes either node will do what I need, so I'll pick based on how I'm thinking of the problem: as moving from one point to another (Curve) or as oscillating around a center point (Wave).