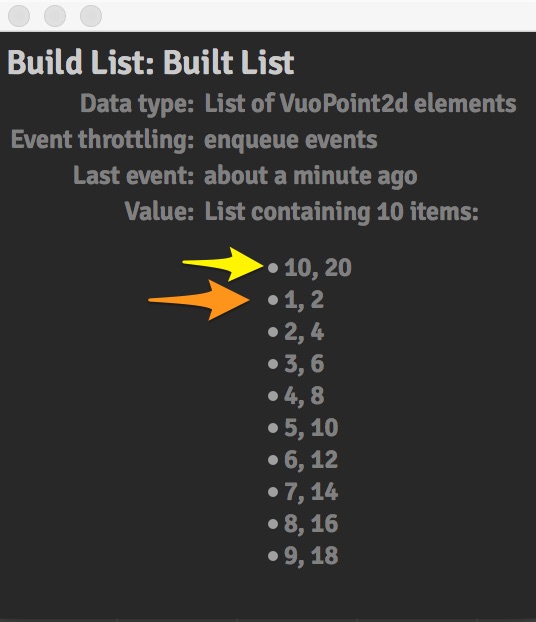 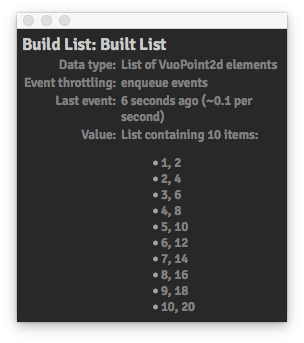 This kind of unexpected behavior, and a lack of explanation in the Manual if it's a "feature", makes me extremely reluctant to rely on Vuo for real work ATM.

I've had to unroll loops and manually wire 25 instants of a series of nodes just to work around this issue. For longer lists this isn't even an option and given how slow Vuo gets with 100+ nodes on the editor and how hard it is to turn functioning nodes into an identical Sub-composition that just works (like making a QC macro just works) the node count rises quickly avoiding making loops.

Building and processing my own lists of various datatypes using fast C backed patches/nodes was the reason I first proposed a QC replacement. QC with JS just wasn't performant generating and manipulating large amounts of QC structured data … so when hearing about VUO was very excited to say the least (and supportive!).

But this fundamental task for me is not working — even so far into the Vuo development as 1.2.6 — this is frustrating.

There's not even a way to simply fire a "double event" to work around this problem that I can find. Certainly Spin Off Event(s) isn't doing it for me. The entire event paradigm while very powerful compared with QC's uniform pull paradigm is quite hard to debug and extremely hard to control at my stage of Vuo understanding. I think it needs work. Stepping through compositions frame by frame (and highlighting the event chain somehow in Editor) would be a start to easier debugging perhaps, but I feel like there needs to be a more user friendly abstraction over the top of it all for novice and intermediate users, I can't think how though yet. I tried dozens of permutations of event cables on this composition to force a second fire event on the second Build List node (without going to extreme of setting up a timer and firing again after 0.1 seconds or something). I feel like a "Make Double Event" node is required just to workaround this problem I keep colliding with in my experiments with Vuo, but how to even do it, wait for the next redraw from the screen? I'm not even using a render node in this. :-)

Is this what you want?

Thanks Kewl, well sorta. The issue I keep having is when bringing in a list of elements into a loop from outside a build list. Process List node works for one processing one list, but what if I want to process more than one list at the same time, maybe even using different indexes?

Either do parallel Process List or, if you want to process within the same Process List, maybe Merge Lists or Append Lists before feeding the Process List. If I understand what you want.

l know how frustrating it can be when you think something should work an it doesn't. We appreciate knowing that, and we'll look into whether we should create more examples, or how we can better clarify the documentation. We continue to work on more ways to do iteration in Vuo; we think Build List and Process List are two powerful tools for that.

In the node documentation for Build List, Built Item includes the sentence, "This port needs to receive each event fired by the Build Item port." We can be more explicit that this port should not receive any other (external) events, which could cause the node to behave erratically. You were right to put a Hold List in the composition. Instead of sending an external event via the Share List node to Get Item from List, the first Build Item event can send the list to Get Item from List. In general, when using values and lists within a Build List or Process List loop you want to make sure all the events to access or use those values or lists come from the Build Item port. Again, I'm so sorry this was frustrating. Thanks for the insight. We will discuss how to make this more transparent.

Thankyou Jean Marie. The Allow First Event node was the trick I was missing. I did try a bunch of ways to send the event to the Hold List node when I had that connected to the Get Item in List node. Thanks also for the explanation. Yes a "? WARNING!" breakout box with guidance around errant events coming into the loop could be worthwhile for the manual.

I think a book of 'patterns' in Vuo could be in order. Maybe even some test exercises like a math textbook to help gain understanding, Vuo really is a little unusual compared to other languages. With such power Vuo offers comes a little complicatedness and complexity. I'll continue to give thought to that as I learn the basics.

Speaking of iteration, if I could author Vuo nodes (ultimate goal!), I'd be able to make versions of certain nodes like Smooth with Inertia to process lists like I did in QC using the JS patch.

If there was a way to make Stateful iterable inside Build List and Process list prior to implementing the Turn most nodes into iterators FR — it could be a stepping stone to that FR itself?

You're right, Kewl. Using merge to (X,Y,Z,W) would get 4 values into a list to be used together — should be enough for many situations. The results can be recombined into new lists outside that loop too.

In the interest of completeness here is my original comp in working order with a minor fix (EDIT exactly same as Jean Maries post actually, I was trying other ways and ended up back at the same solution).