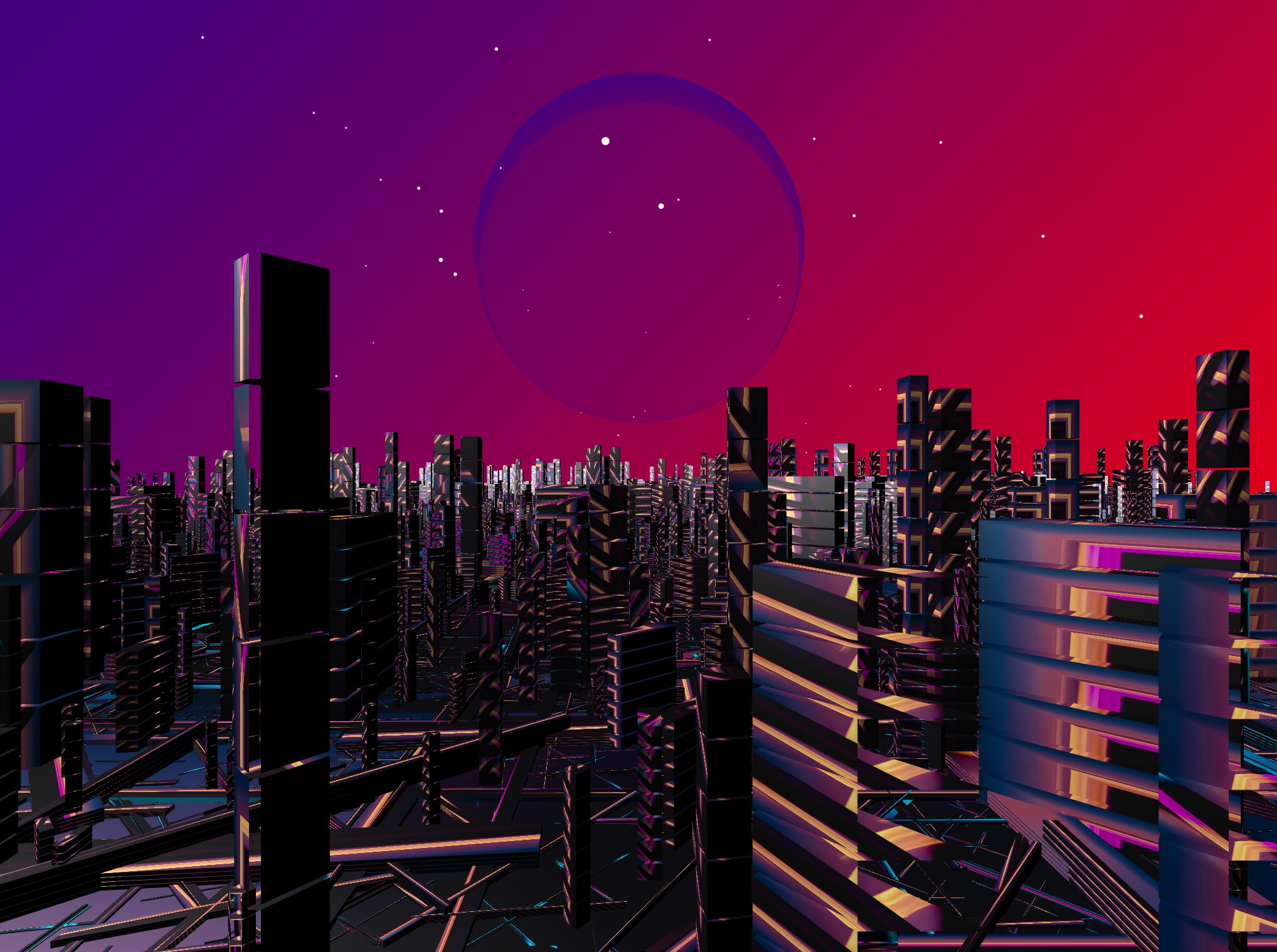 neon city is a never ending city skyline procedurally modeled with structure synth. I was going for that 80s synth wave type of feeling but feel free to change the city texture for different results.

Hey Dustin thanks for this. Great inspiration to explore 3d building in VUO. I found this a very helpful starting point to remix into this abstraction. I changed to a fixed camera and modified a version of your starfield with a new twisting structure object file I had already made. I was going for a slowish movement but not sure if I ve slowed /stepped the frame rate with overloading or bad programming:) I also added some audio to brightness using your composition audio -this could be taken much further too of course- thanks again Dustin have now put the linked files in a zipped folder with the composition!

cool Paul feel free to mix it up. the assets in this composition are all my creations so feel free to use them. the audio is just an 8 bar loop of a drum and bass sequence I have been working on. I felt the audio reflected city life. I was going to do some audio reactive programing with the audio loop but this composition got a little heavy for my computer seeing the city model was so so large. I was thinking of making the moon a laser disco ball but I never got that far.

for me to run your file and see and hear the audio reaction there are a couple assets missing. one model file on your desktop ../../Desktop/DNAbasicc4dIterated.obj and the texture image which looks like its buried deep on a drive somewhere ../../../../Volumes/2021ARchives /BUNJI_March2022/BunjilPlaceMarch2022_compile/LandscapePortaitStills/IslandLooksOutToSea2.jpg if you put these files in a folder with the composition and audio loop then zip that up and upload it I will be able to run your composition.

right now it only shows the modified star field because it doesn't know where the model and texture are. so if you throw them all into one root folder and rename the model files path from ../../Desktop/DNAbasicc4dIterated.obj to DNAbasicc4dIterated.obj and the texture path from ../../../../Volumes/2021ARchives /BUNJI_March2022/BunjilPlaceMarch2022_compile/LandscapePortaitStills/IslandLooksOutToSea2.jpg to IslandLooksOutToSea2.jpg and then save the composition to the root folder with the model, texture, and audio assets. I will be able to see and hear what you are working on.

i'm glad my file inspired you to get creative, mix and mash up some nodes ;) as far as it goes with you slowing things down it looks to me like you actually sped up the tiling center z position by changing the speed to be at 4 where I had it 0.3 I think and then you slowed down the tiling center x position by changing the duration to 60. so that means its going to take an entire min. to fully pan that curve on x which might be too slow to notice, i'm not sure as I can't see your model because its missing. either way you would be zooming in much faster than going left to right. not sure if that's what your intending or not. I don't think you overloaded anything you just made the curve really long duration so it might be hard to see.

that's my thought anyway I overloaded this composition with using a really large model which Vuo handles pretty well but sometimes its sluggish and my zoom gets choppy but that's just because the structure synth city model is really large and then its getting tiled so for me and my computer being old this composition does overload a bit but its not that bad. I just wasn't able to capture the audio with my video file because the composition was taking up so many resources.

Dust smashing it with the community compositions - thanks!

your welcome Joëlle, I thought this one came out nice too.

Thanks again Dustin have now put the linked files in a zipped folder with the composition! and posted to my own page too with credit for you:)