One use case might be a window which contained controls (buttons, sliders, etc) and visual I/O (input/output) layers with mouse interaction restricted to the the I/O layers.

At the moment I can't target mouse moves to a specific layer. 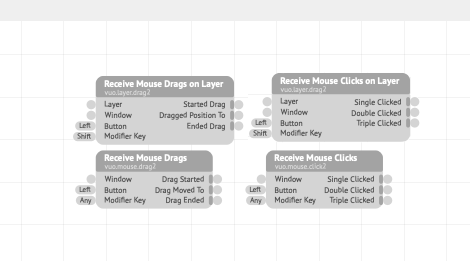 Gotta say, the control of Windows is awesome. I'm able to prototype some really cool stuff.

The Vuo window is able to get mouse positions (even outside of its window) when it's frontmost, but not when not frontmost. Request: ability to get mouse coordinates, at all times, regardless of window level. I assume it's not a security issue, since the screen capture node continues to work, even when the Vuo window is not active.

View a 360° image or movie by dragging the file into this composition's window. Drag the mouse to look around. Scroll to change the field of view.

For best results, images and movies should be equirectangular panoramas (360° on the X axis, 180° on the Y axis).

uses Audio input or generated waveforms to visualize lasermod like effects. Use parameters to change appearance.

...Or at least an option to continue receiving this data.

I see four ways to implement this:

I see 3 as the best option, as it would not require the addition of new nodes or the addition of new ports on existing nodes, but rather a single new node that would plug into a window node in the same way that Change Fullscreen Status and related nodes already work.

In addition, a way to further extend this idea is to also allow the composer to control whether this would also apply if the window were minimized, or if the application were hidden. These properties could be implemented on the same vuo.window node.