Hello, Vuo mailing list subscribers. I’m Karl, a developer at Kosada. I work with the Kineme plugins and occasionally do other app-related projects. I get really excited about computer graphics and enjoy building tools that people use to create those graphics. In addition to working with Quartz Composer and Vuo, I also spend a lot of time writing plugins for the Unity game engine.

I thought it might be helpful to write a post on my experiences with Quartz Composer and Vuo, seeing how many of you are avid QC users. I’d like to preface this by saying that I am relatively new to the world of visual programming languages, having been introduced to the concept a scant few years ago. However, it’s been a wild ride since then! I’ve met some of the most passionate people I know working with the Kineme community, and it’s been a fantastic experience.

My first impression of Quartz Composer was a bit mixed. The ease with which one could construct technically impressive compositions was amazing. Audio processing was a snap, working with 3D objects was child’s play, and interactive elements were drag and drop. Things that usually would take me days to build using text languages were working out of the box. To add to that, the development iterations were crazy fast! Don’t like how something behaves in a composition? Change it while it’s running and tweak results on the fly. Madness!

However, there were some things that I found to be tremendously unintuitive. It may sound silly to some of you Quartz Composer ninjas, but the concept of an “Iterator” patch as a "for" loop took me forever to wrap my head around. As someone with a background in traditional programming there were a lot of idiosyncrasies in how data was handled in QC that were perhaps well-intentioned, but ultimately served to muddle the process.

Vuo is neat. I’ve found it to be intuitive to learn and it addresses a lot of the issues that I have with QC. It also takes a lot of inspiration in the strengths of Quartz Composer. One of my favorite features of Vuo is the push flow style of information. Vuo can use any number of independent triggers to make parts of your composition run. You can design your composition so that some parts run continuously, and others run only when needed. This opens up a lot of really cool possibilities that were either difficult or impossible to implement with QC, since in QC your composition is locked to the video framerate.

We've just updated our Vuo Quick Start tutorial, where Travis connects a few nodes to make a simple composition. Check it out: 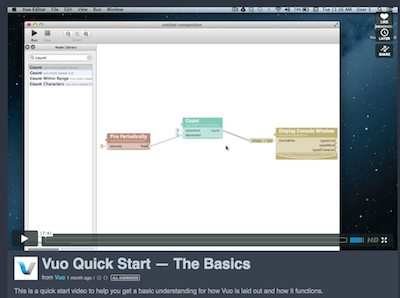 I'm looking forward to writing more about Vuo and QC after we've implemented more node sets that expand what Vuo can do graphically. In the meantime, you can learn more about our plans at the Vuo roadmap.