Hello everyone! We are continuing to make progress on Vuo 2.0. We wanted to share the latest on when you'll be able to try it yourself. In addition, we want to share some news on new nodes and some node modifications that expand what you can do with Vuo 2.0. Do check out our new Pro feature, Find Faces in Image. To remind you of how to best take advantage of Vuo 2.0's new pricing, we've included a pricing flowchart.

Right now our best estimate for our Vuo 2.0 beta release date is this June or July. As Jaymie mentioned in a previous post:

"Before we release the final version of Vuo 2.0 to the world, we're going to release a beta version to the Vuo community. This will give you a chance to try out the new features, and will give us a chance to fix any major problems that you discover before the final release.

Who can be a beta tester? Anyone who's ever bought Vuo…

Whether you're a Vuo virtuoso or just getting started, we heartily invite you to try the Vuo 2.0 beta when it's released. We'd appreciate feedback from all perspectives."

Have you ever thought about how a webpage and Vuo could interact? We've added a Make Image from Web Page node so you can try it out. With this node you will be able to view an image of a webpage in Vuo, and interact with it using your mouse. What is perhaps even more useful is that now you can also create your own HTML control panel to control a Vuo composition, as the following video shows. 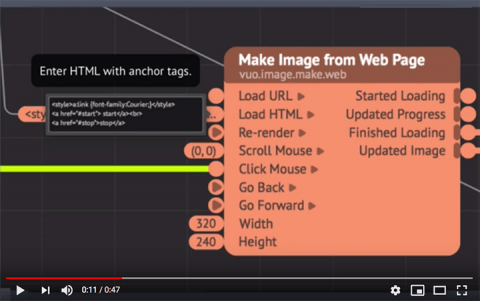 Longing to hear Vuo articulate text? With Vuo's Speak node, you can have text spoken aloud by different macOS System Voices. Want to channel HAL 9000's, "I'm afraid I can't do that, Dave," anyone? 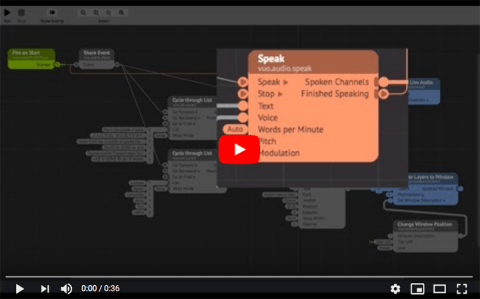 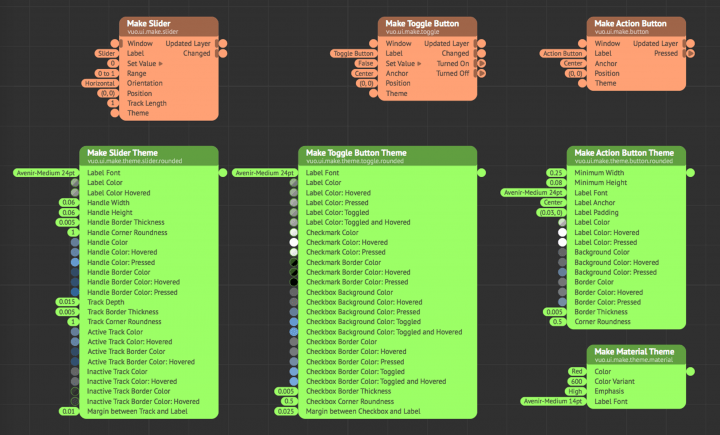 We also have created a Make Material Theme node based on Material Design. The colors are optimized for a white background, and have input ports for color, color variant, and emphasis.

Text layers will now scale with the window size, as the community requested. Make Text Layer adds input ports to rotate the text, gives you an option to set the wrap width, and adds an opacity port. You can additionally stretch or expand the text, changing the horizontal and vertical scale by transforming the layer. 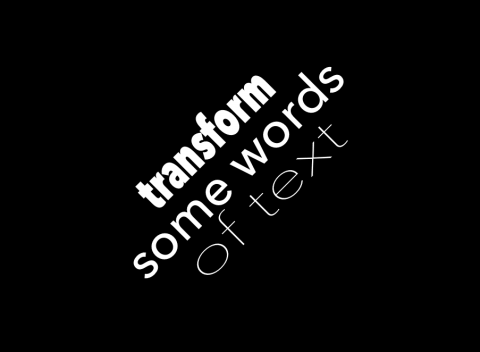 We changed the algorithm for rendering semi-transparent objects by adding support for depth-sorting. While it won't cover all cases, it will fix some of the problems identified by our community, and is partial implementation of a feature request for improving the rendering of transparent objects.

If you have Vuo Pro, you will be able to use Find Faces in Image to detect faces in an image, a community feature request. 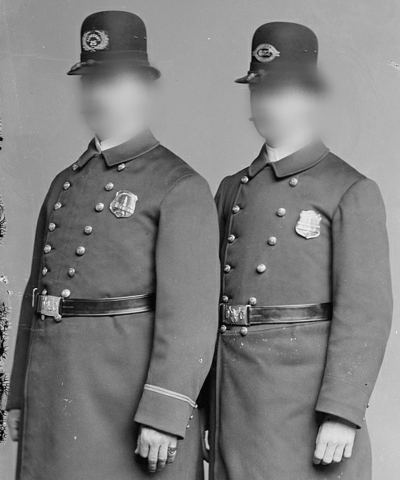 If you want access to all the Pro features, including Find Faces in Image, now might be a good time to upgrade. If you're thinking about buying Vuo Pro, you might want to do so before the 2.0 release, when the price will go up to $299. Instead, you can buy Vuo Pro 1.2.8 now for $149, get a free upgrade to Vuo Pro 2.0, and get early access to Vuo Pro 2.0 as a beta tester.

In case you missed our previous post, here's a summary of the new pricing for Vuo 2.0:

One of our goals with the new pricing is to help the Vuo community grow in numbers and diversity. If you know someone who might be able to use Vuo in their work, please tell them about it or send them to the Quick Start Tutorial.

We'll continue to update you periodically with any changes to our beta release date.

HTML page link looks good, there was a plugin for QC (not the Kineme server/client plugin) that created a web socket which allowed pretty effortless UI construction in a browser window, I loved it, sliders you can set the range of and sliders and menu items that are dynamic i.e. can be changed with code, depending on the context/state of code.

So looking forward to this release! Looks like you've done some amazing work Vuo team! I truly appreciate how responsive and transparent you are with the Vuo community.

before we know it July will be gone, is there a beta in sight ? : ) Please take my nagging as good natured, I know how it is to work on a big ambitious project... Hope everybody is well and having a good Summer (for those in the northern hemisphere)

We are closing in on the beta release date. We are finishing up on pre-beta cases and testing. Our revised estimate, though, is 4 to 6 weeks, or sometime in August. Thanks for asking! And yes, despite the heat, it's a good summer!