Travis here with some news from Team Vuo:

We recently completed a new video tutorial! — "How to use TouchOSC for creative input in Vuo." Watch it on Vimeo or Watch it on Youtube. 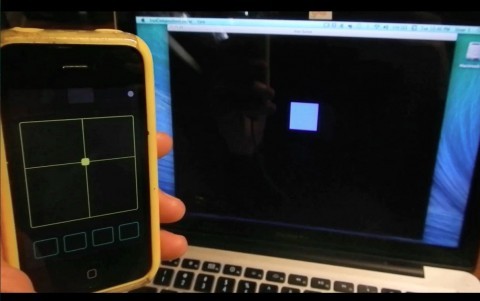 We received a couple feature requests: Grab workspace with spacebar and Keyboard / Keypress node. After looking them over, we found them to be exciting and simple, so we went ahead and completed them! They're up and running in the current release. Here's a shot of a new example composition,"Play Blues Organ," showing some of the new nodes in action: 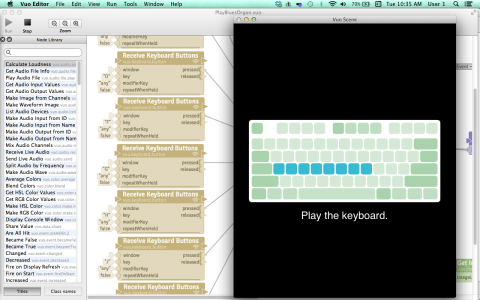 We examined our poll results regarding upcoming tutorials. The clear winner was a tutorial on understanding how events flow through a composition. After receiving additional helpful feedback about that from some of our users, the tutorial is now in the works!

And here’s a little bit about one of the go-to developers on Team Vuo:

Karl Henkel is drawn to work that empowers people to be creative and helpful. He’s played a significant role in developing Vuo’s Leap Motion, 3D geometry, audio filter, image, and movie nodes, in addition to working on whatever else Steve, Jaymie, and Melissa can convince him to shoehorn in. On several occasions, he’s contributed to Kineme development. He's inspired by what Team Vuo has been able to create thus far and is quite excited to begin developing some new mesh filters and GLSL nodes.

When he's not working on Vuo, Karl manages Parabox LLC! Under that hat, he does Unity game consulting, designs middleware, and builds Unity plugins. Karl's biggest project is ProBuilder, a plugin for the Unity game engine that allows users to construct 3D geometry in the editor. ProBuilder is among the top selling products in the Unity Asset Store.

Karl is our go-to person for movie reviews (we still haven’t figured out how he has all that time to see movies, read science fiction classics, as well as play guitar in a local band). He and his girlfriend, Sara, can often be seen mountain biking and running outside of town! We're eager to see what else Karl will accomplish and we're thankful to have him on Team Vuo!

Thank you all for your continued support! We're quite excited about the new functionality in 0.7, and even more excited about what we're working on for 0.8!