The play "The Floor: Shopping Rolls Camouflaged" is a foray into a surreal world of gravity-defying motion. By turns funny, poignant, and exuberant, the performance blends the human with the technological. Vuo plays a major role in this performance written and directed by Teo Dumski. 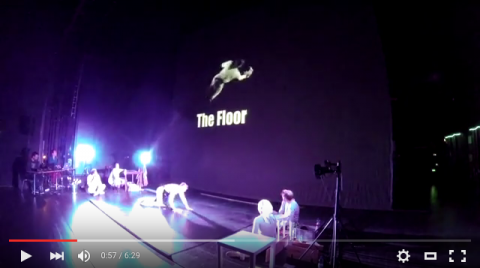 Teo described the performance as both a melodrama about love and, on a deeper level, a tale about money and consumption: "that you have to fight for food in a world of prosperity". Drawing from his connections with many theaters and institutions, Teo put together a team for this production that included a musician, a stage designer, and a video artist. "The Floor" was performed in Germany, while Teo himself is based in Wrocław, Poland.

Here's what Teo had to say when I interviewed him about the making of "The Floor".

How would you introduce yourself to the Vuo community?

I'm am actor, director and performer. In my work, I oscillate around the theatrical domain of art. I rarely like the way of using new technologies in theater today. Today's art uses them to make something easier for the artists and/or simply put some "fireworks" into the piece. I try to find a more natural way to use a computer.

I don't really know why our world is so divided into an intellectual-technical-logical part and this second spiritual-intuitive-abstract part. Therefore, I try to connect these two domains that would otherwise be separate. Personally I think that technology and art (intellect and spirit, logic and abstract) belong together as they are both essences of human nature (or the human brain).

So, technology achievements such as Vuo or Quartz Composer give me the ability to build a world with a computer and put in it a live actor, which is the pure essence of theater. Artists often try to separate logic from the abstract or use a computer only to do work for them. In my performances I make the live performers and the computer dependent on each other, as they are not able to exist separately. In this case they can only create theater together. 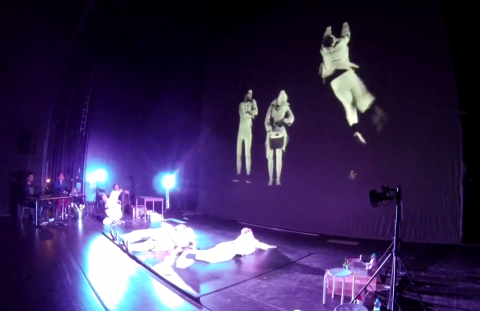 How did you get the idea to put actors on the floor and the camera overhead?

I saw a movie somewhere in the Internet, where actors were doing an improvisation lying on the floor. It was only to impress the audience for a very short time. In a couple of minutes I perceived its huge potential, so I decided to create some longer theatrical scenes.

When I reproduced this effect I quickly noticed that the trick is interesting only for a couple of minutes. So I tried to use it not as a trick but as a theatrical convention and embrace all the qualities it brings to the performance.

How did Vuo help you tell the story?

The key to this performance is live action; there’s nothing recorded or put on the timeline. The audience can see not only the result of our action but also backstage. Everything what we do for the camera is done in front of the audience. Spectators can see the process of making this theatrical world. Vuo brings capabilities of live processing images from the cameras, live editing on actor action, so we can, for instance, build a live movie by switching cameras. We have a title layer we blend with these images, crop an image to some dimensions or aspect ratios, divide an image, and everything is controlled by MIDI controllers. This live-centrism gives us the ability to, for example, gain saturation when characters fall in love. When they make a selfie, we simply flash a brightness and produce a flash sound to microphone. So actors can improvise sometimes without wondering if the technical layer can manage this improvisation. Everyone (including the image operator) has the ability to improvise. Personally, this is the most important thing in theater: spectators are experiencing a live actor who can do everything in the area of performance. This feeling is crucial and priceless for theater, and Vuo gives this ability to make everything live.

What was your technical setup?

In this performance the setup is quite simple. I have two USB cameras from which I capture a live image to Vuo (I use CamTwist to send image via Syphon). Then I use a MIDI controller (iCON iControls) to adjust the image parameters and colors, set the positions of titles (to not put it on an actor's face or to play with him), crop a portion of an image, switch cameras, make a camera shake effect in more dynamic scenes.

Have you used Vuo for other projects?

This project is the first where I used Vuo. I used to work with Quartz Composer but when I found Vuo I immediately switched to it and started to develop more complex compositions.

In the meantime [since "The Floor"] I've had some simpler projects, where I use Vuo; all are pure live-driven. Now, I’m working on my next performance, we’re in the middle of rehearsals. It will be much bigger and will be presented in cinema, on a big screen. This project is much more complex, we use OSC to connect and control everything wirelessly. Also, I plan to switch to IP cameras, because the USB system is not reliable sometimes (it’s very sensitive to mechanical cable damage, sometimes causing other problems, which are hard to debug). In this project we use a Wacom tablet to draw images which are something like live drawing-scenography.

Note from the interviewer: Teo's upcoming performance is by the group Cloud Theater. Here's an excerpt from Teo's description of the play that tells more about its use of technology:

We all know the story. "A short outline of everything" is an artistic vision of the history of the world - from its creation till the absolute end... The central part of the performance is a camera which, installed above the stage, provides the audience with an uncommon perspective. The technique, first used in another play, "The Floor: Shopping Rolls Camouflaged", has been enriched with live drawing, created during the show to become the set and match the actors on stage - thus allowing the drawing to also "act" in the play. All the past physical boundaries are gone: the spectator can experience images from a microscope or from nature documentaries, view battle scenes or immerse in abstract images. And they are all created "here and now", at the audience's feet, and delivered to them through subtle camera work, live drawing and painting stage set and special effects. 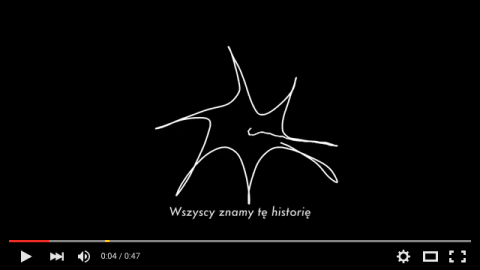