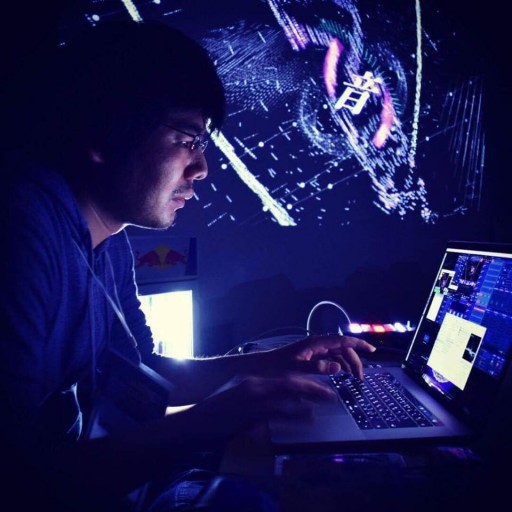 Meet Satoshi. He's been VJing for 3 years, and one year ago he created the VJ group M.U.//Mikudarihan Uppercut. When performing live, Satoshi likes to begin with a minimal set of materials, then transform them over the course of the show in a way that tells a story. This style of performing has led Satoshi to seek out a creative platform that is, in his own words, "fast and light."

Satoshi has explored using lots of different software. To get a sense of Vuo's processing power, he built a particle emitter (If you download the composition, there are actually six individual compositions. The one labeled "sampleL03_particleEmitterL_AttractionAndGravity" is his particle performance test.)

How did you get started VJing?

Aki Yoshioka, an exceptional music producer that works at UltraJapan, suggested that I try VJing.

What is your favorite VJ setup?

The hardware I usually use is a MacBook Pro with the TVone HD mixer. I don't use a MIDI controller; I only use a keyboard with a setup that I created for modul8, QC, or Vuo. As for software, I use modul8 -> Syphon -> Vuo, QC, or only Vuo. I've been using Vuo a lot lately. The particles and lines that seemed so heavy in QC are very light to work with in Vuo. How did you choose Vuo?

Vuo has the best of both, which makes it the best visual programming environment for me. For example, with 3D Object particle, I was able to connect a 3D object with the particle function, and grow and evolve in that manner.

How did you test Vuo's processing power?

It was an experiment I performed during a break. Vuo drew 50,000 particles on my MacBook Pro. One million particles was slow but it was moving and working…. In Quartz Composer, 4,096 particles was all it could do — Wow. What inspires you to keep creating?

I like movies. There is an amazing Japanese VJ called 100LDK that I really like; he works with real videos more than CG. I don't usually mix a lot of materials; I like to show long materials as if they were a movie. When I VJ, I like to begin with a minimal amount of materials, play with the parameters, and mix them. I like to create many materials from transforming an original one.

How do you see Vuo influencing your work?

It influences me a lot. I would like to try Vuo with Leap Motion or Kinect. It must be a lot of fun to use them with particles. Vuo lets you create a great variety of things very quickly. Not by using things again and again, but turning old things into something new and producing a lot of combinations. Vuo is the software that allows me to do all that. Any dreams for your future as a VJ?

I'm VJing around Japan now; I would like to try VJing in Europe. As a first step, I'm going to Portugal and Italy in November.

Nice. I too like drawing lots of objects to the screen and QC could never do enough lines per frame at 30fps.