We've just released Vuo 1.2.3, which adds a node for projection mapping — with support for corner point adjustment; edge blur, gamma, and crop; overall gamma; and perspective and affine projection. Thanks to iason for suggesting this feature and Imimot for helping fund its development!

In Vuo 1.2.3, we've added lots of other features, too, including a Save Data node that can write text to a file, input editors for picking devices such as audio and MIDI, and support for newer Kinect models (1473 and 1517). And we've fixed many bugs. 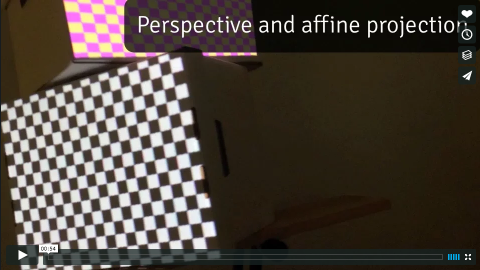 The artistic folks at Out of the Box Productions recently presented an interactive installation in Toronto that used Vuo to evoke a multi-sensory virtual forest. Created by Gwenyth Dobie, with William Mackwood (wmackwood) leading the technical integration, Rallentando was "a response to our experience of 'hyper living'". It offered the audience "a gradual slackening of tempo, leaving behind the distractions of contemporary urban life".

For more about Rallentando and how Vuo played a part in it, read our interview with Gwenyth and William. Plus, see William's composition Nature Movement in our gallery. 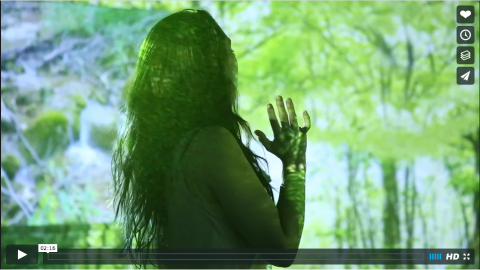 Earn votes by making a tutorial

Have you run out of votes to spend on feature requests? You can earn more votes by buying a new copy of Vuo or an update, sharing compositions, submitting helpful bug reports, contributing good code — and now, by creating a tutorial. When you create a tutorial and we add it to our tutorials page, you get 20 votes. Two community members, Simon Boas (sboas) and Magneson (Magneson) have already contributed some really instructive tutorials. If you've made a tutorial that you'd like to submit, please contact us.

A lot of you know Quartz Composer pretty well and would like to translate your knowledge over to Vuo. We'e put together an FAQ to help you do that: What do I need to know if I'm coming from a Quartz Composer background?

Here's an example that illustrates several of the similarities and differences between Quartz Composer and Vuo. 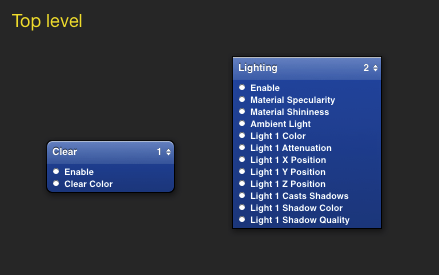 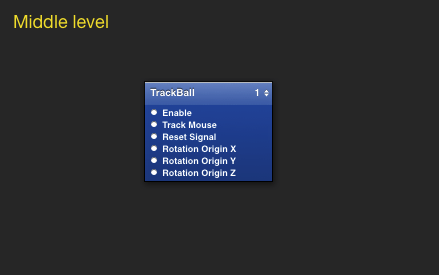 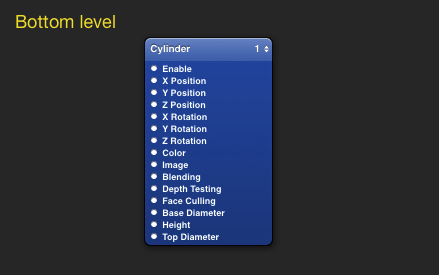 3D objects — In Quartz Composer, the Cylinder patch controls the parameters of the cylinder and renders it in the viewer. In Vuo, the creation and the rendering of a 3D object are split into separate steps. The Make Tube node (which you can find in the Node Library by searching for "tube" or "cylinder") creates a tube. In the composition above, the tube is immediately sent to Render Scene to Window to be rendered. (An advantage of splitting the creation and rendering into separate steps is that, if you wanted to, you could group 3D objects together and build up a hierarchical scenegraph before rendering.)

Trackball — In Quartz Composer, you add trackball interaction to a rendered scene by enclosing it in a TrackBall environment. In Vuo, you connect the output of the Make Draggable Camera node to the Objects input of Render Scene to Window. (You can add other kinds of cameras, too, with nodes such as Make Orthographic Camera, Make Fisheye Camera [Vuo Pro], and Make Stereo Camera [Vuo Pro].)

Lighting — In Quartz Composer, you add lighting to a 3D object by enclosing it in a Lighting environment. In Vuo, Make Tube and other 3D object nodes have Material input ports that control the lighting. In the composition above, the Material ports have been set to accept colors (right-click on port > Set Data Type > Color, or connect a cable from a color output port). Color Materials automatically have lighting applied. (If you want more control over lighting, you can use shader nodes such as Shade with Color and/or lighting nodes such as Make Point Light.)

Node execution — The Vuo composition above has a node with no counterpart in Quartz Composer: Fire on Start. Without this (or a similar) node, the Share Value and Make Tube nodes wouldn't do anything. With it, the Share Value, Make Tube, and Render Scene to Window nodes each execute (evaluate) one time when the composition starts, causing the tube to be created and rendered.