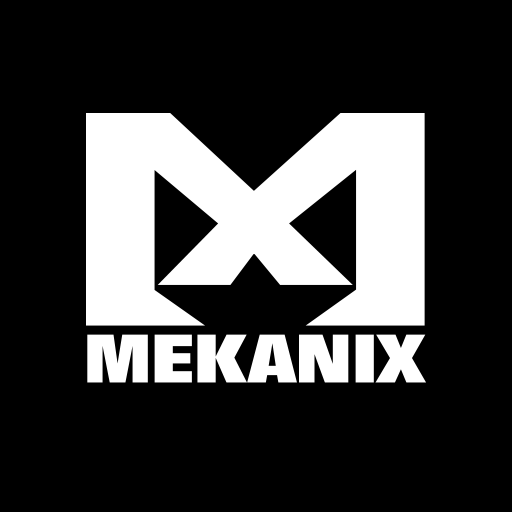 As a VJ based in Los Angeles, he’s worked with entertainment companies ranging from Universal Music to Live Nation to KCRW, and artists including Rezz, Deorro, Chris Lake, Marshmello, and Nicole Moudaber. He’s the House VJ for Insomniac’s festivals in Southern California. He’s a wiz at creating Vuo image filters and image generators for VDMX.

MEKANIX, a.k.a. Azy, is also one of the most active members of the Vuo community. He’s shared numerous compositions and videos made with Vuo in the gallery and on Twitter and Instagram. As a veteran VJ, as well as a creator of motion graphics for movie trailers (his day job), MEKANIX hones his technique through collaboration with the community.

In this community spotlight, MEKANIX talks about his process of learning Vuo, his experience as a VJ, and a package of compositions he’s put together for use in VDMX and CoGe. 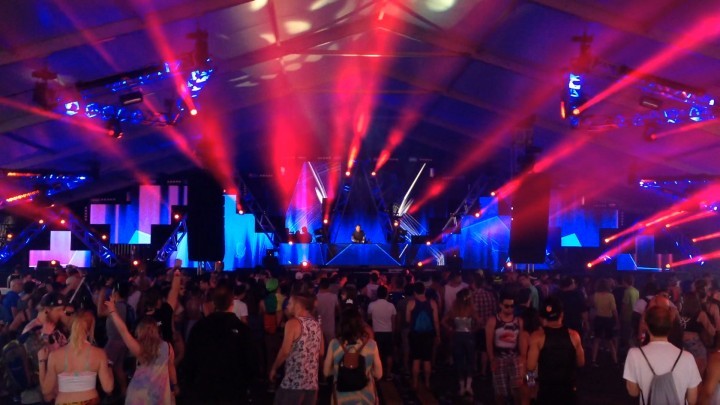 How would you describe yourself as a VJ?

MEKANIX was formed in 1999 after being influenced by the Los Angeles underground rave scene. By developing advanced graphic technologies MEKANIX was able to create a one-of-a-kind experience by mixing pre-rendered loops, generative elements, live cameras and audio-reactive FX. Breaking the mold of installing loops that ran all night. In the beginning Max/MSP was used to develop a standalone patch processing Nato and Auvi objects. This patch was named “Bloodmary” and is now a 64 bit VDMX patch processing Vuo FX and Vuo image generators.

On Instagram, you’ve shared a series of compositions tagged #1up. What are 1ups?

What I was doing with that feed is what I dubbed "1up". Which were one-a-day Vuo comps to teach myself how to use the application. Like Beeple does his “everydays”.

I began the #1up series to quickly learn how the Vuo nodes worked. Given my prior experience using object-oriented programming and the declining stability of Quartz Composer, Vuo felt like the obvious path to take for developing image FX and generative patches for mixing. 1up's are a daily exercise, with the goal of creating one Vuo composition from scratch. 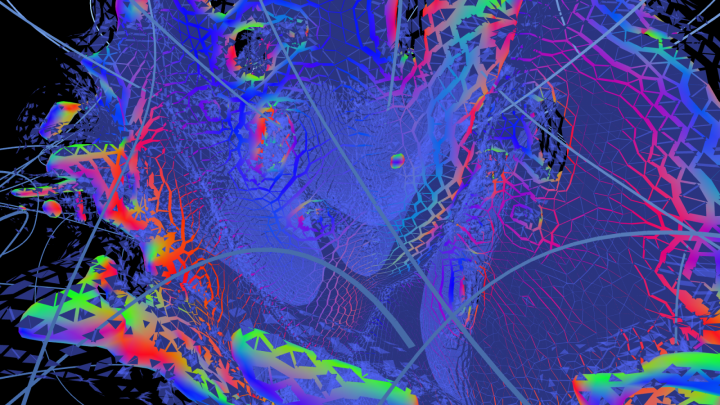 What goes through your mind when you make a 1up? Do you build on previous ones or start from scratch?

The process was to start with a blank canvas, what comes to mind? Let's create something generative today. So which nodes work best for generative content? I immediately saw the power of lists, and started familiarizing myself with them. The next day I would start again with a blank canvas. Grab a nice 3D model and see how Vuo's shaders look on it. Combine that with a generative environment sphere and see how efficiently the composition would process the scene.

That led to using some community-created nodes. Like Satoshi's particle system to fill the volume with some nice 3D particles. Magneson’s Spiro nodes created some cool FX like electricity around the object. The 1up exercises also led to some really cool collaborations with the Vuo community. If I ran into trouble making a 1up, I could ask a question on the Vuo community website to get answers. Some of the coolest compositions are actually collabs with Jaymie and others from the community. 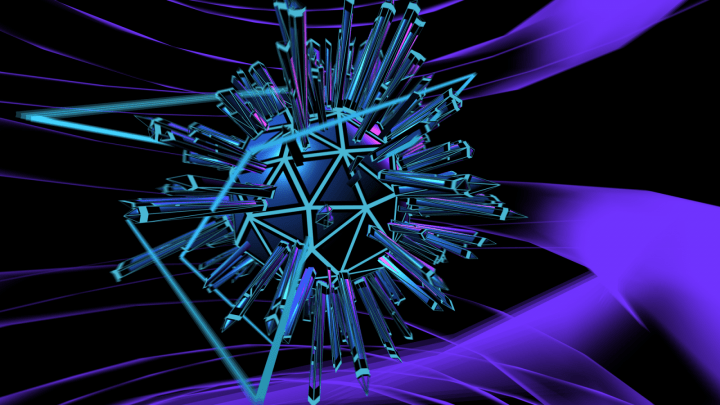 What have you learned from 1ups? How have they influenced your performances?

While developing the #1up series. I quickly learned how to create image FX and image generator protocols. I find the most enjoyment when interfacing published ports with data sources in host apps. You don’t want too many vertices on your geometry, so load balancing comes into play during this process. I also learned how to load Vuo image generators into RAM in VDMX for immediate triggering.

I spent months finding the correct combination of settings and geometry limits to be able to perform a live AV set in 2017 with a local artist Raíz (Droid Behavior). We found Vuo to be very powerful when interfacing with live audio, and made the collaboration process go smoothly. We were able to build a half-hour set in a matter of two weeks. 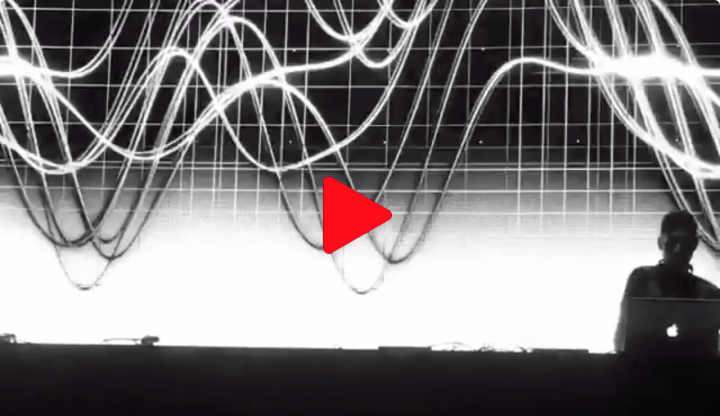 What hardware and software do you use when performing?

Hardware includes a Mac Pro 2013 for performing. Running a VDMX patch processing ISF’s, Vuo FX and Vuo image generators. All pre-rendered content encoded with Hap. This combination gives you the ability to process 4 layers and output to multiple HD devices. Which are needed for the larger stages at festivals. All controlled via MIDI device and live audio analysis.

How much preparation do you do in advance versus on-site?

A three day festival will require around 2-4 weeks of prep work. This includes creating pre-rendered content for mixing. It also includes some fresh Vuo generators and Vuo FX. Vuo really comes into play when it's crunch time, you can quickly create content that doesn't need to be rendered/transcoded. The ability to change Vuo patches on-site is a huge advantage, as you can easily change looks on the fly with the client(s). 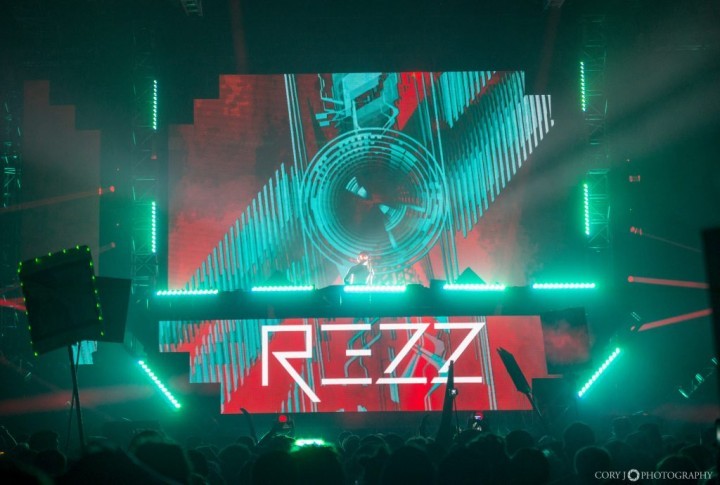 How have audiences reacted to your performances?

We got a huge round of applause when we did the AV set at the Orpheum Theatre last year. Audiences at festivals usually start chanting to the beat when the VJ / lighting director and the laser operator hit their marks. Festival visuals are a collaboration with the DJ’s. If all 4 elements are firing on all cylinders, the energy can get intense. Clients get really into the work on show days, and cheer you on when performing.

Tell me about the package of Vuo compositions you’ve put together for the community.

I've put together a set of Vuo compositions called Connected Shapes that are image generators that can run in host apps like VDMX and CoGe. I used the Interleave Lists node to connect simple geometrical shapes. These compositions have published ports that can be attached to data sources in the host app. That way you can sync the parameters to the master clock to keep tempo. In addition I've also uploaded some image filters and image generators as a bonus.

I plan on building Interactive applications for architecture. Building image FX that can be run in host apps. And building some image generators that can be run in host apps or standalone to Syphon into host apps. I'm looking forward to exporting some FFGL plugins created in Vuo. As there's quite a large market on Windows for FX and generators. Interoperability is one of Vuo’s most attractive offerings to me. 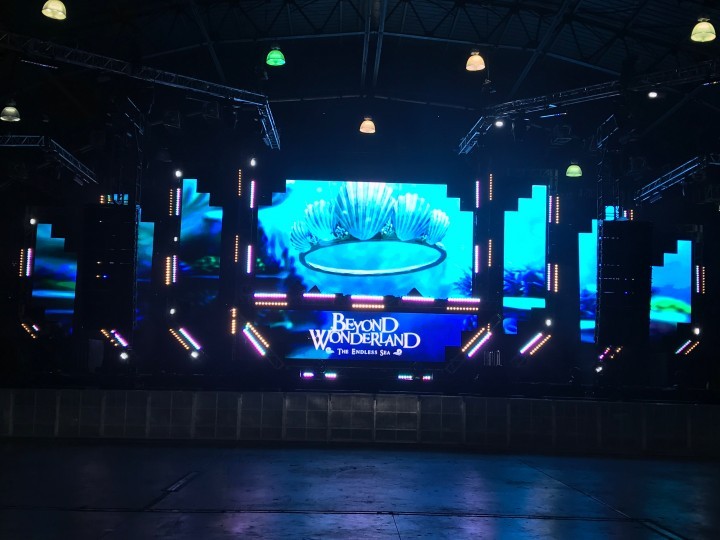 We should all be grateful for Team Vuo for always having an answer to any questions asked. Bodysoulspirit for always helping out newcomers and his passion for Vuo. Magneson for sharing his knowledge on how to spread lists to create grids and most recently his List Tools node set. khenkel for his Parabox node set. VJ SATOSHI for his Particle Emitter node set.