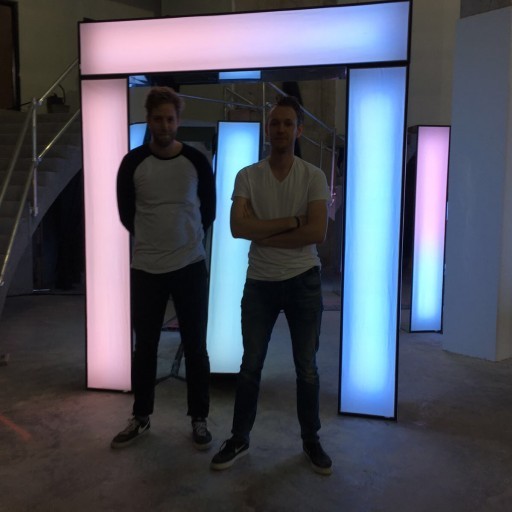 Circus Family, an audiovisual design studio in Amsterdam, used Vuo to create two projects that enchanted their audiences. These are two of several projects where Circus Family used Vuo. In The Rain Project, raindrops created a display of images, light, and sound in a natural forest, and in the Hema Sintersizer, children created songs with a giant music-making machine during the Dutch children's celebration, Sinterklaas. To learn more, I interviewed Circus Family's Cas Dekker.

What was the Spa Rain Project?

As ode to the never-ending source of Spa mineral water, Circus Family worked with J. Walter Thompson Amsterdam to create The Rain Project. We produced a short film in which drops of rain turn into sound, light and projections, projected onto the nature in the area of Spa, Belgium. 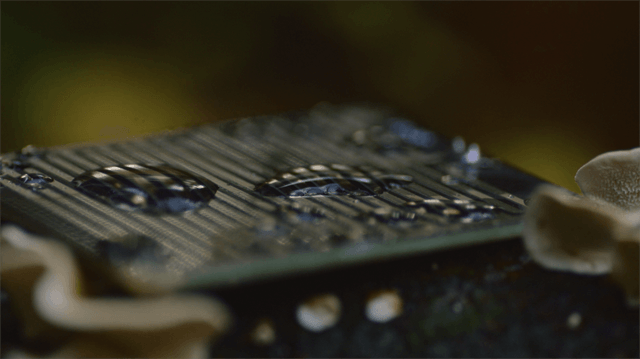 Rain detection sensors were placed throughout the forest. As soon as raindrops touched the surface of the sensors, projections, light effects and sound were triggered. The forest changes into a fairytale-like scene that emphasizes the direct relation between the raindrops and actual Spa mineral water.

Can you explain more about how you set up Vuo to interact with the other apps you used?

We made a setup where we used an Arduino Mega as a base station at which we were able to connect up to 14 rain sensors. The rain sensors we used are basically big resistors, so with the data it was possible to calculate the amount of water that was hitting the sensor.

On the Arduino we combined all of the sensor data and sent it as one serial string to a laptop running Vuo. Vuo cut up this serial string so we had insight into all of the sensors individually and could condition their data. We set up Vuo in such a way that we could determine a threshold at which we would consider it raining. (When the value changes ‘x’ or more in a time of ‘y’ it means it rains at intensity ‘z’).

Vuo sent out MIDI to Resolume Arena and Ableton Live. Resolume triggered the different footage and the Syphon stream from After Effects. This gave us the opportunity to not only adjust the mapping but also the content we made between shots without re-rendering.

Behind the Scenes: The Rain Project

Also a little TouchOSC iPhone template was created to see the live sensor data, reset the sensors and compositions remotely and to adjust the brightness of the outputs so the cameras could be properly set up. TouchOSC got its content directly from Vuo. Vuo’s OSC support has been really helpful in all of our projects. Recently we did an interactive installation called TRIPH, another project where we used Vuo, for the South by Southwest festival where our complete troubleshooting depended on data delivered via OSC.

What about Vuo made it a good fit for this project?

In this case Vuo shined in data conditioning. The fact that you can easily adjust a running composition and see all the different data at certain nodes meant that we could easily play with the rain sensor data and iterate a lot of ways of conditioning this data (and easily make last minute adjustments while it’s running). Making this data visible in a nice little UI meant that after the initial setup we all could look into the rain data to make sure the sensors were placed correctly and actually working :)

Also the integration with OSC and MIDI is essential and very natural: setting Vuo up to interact with programs like Resolume Arena, Ableton Live and TouchOSC went effortlessly. This way Vuo kind of acted as a central hub to control subsequent specialized programs.

How were those ‘magical’ lighting effects achieved?

For the Spa Rain project we used 25 RGBW DMX LED PARs placed strategically behind trees, 15 DMX LED orbs placed on the ground and we had access to 6 different projectors. The projectors ranged from a small pico beamer for hard to reach places and angles to a massive 20K projector to project on multiple trees at the same time. 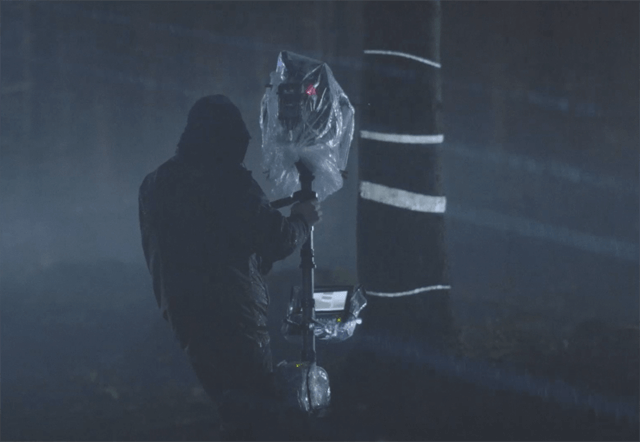 The video content was designed to really complement the elements in the forest. We made all white content to highlight the surface that was being projected. This way the content not only stood on its own, but was also used in a way to accentuate the actual colors of the forest.

What was your biggest challenge when conceiving and executing this project?

The technical execution depended heavily on the communication between sensors, different software and hardware. The challenge was to design and build them in such a way that there would be minimal setup time on location. Also calibrating sensors and changing parameters should take minimal effort. All of this made it so we had to plan ahead exactly all that was needed in terms of technical supplies but also software and programming, video content and the way the whole operation had to be produced.

Because the forest where we filmed is an actual location where the groundwater is being used for Spa water we had to make sure no oil or gasoline leaked from the generators or vehicles, so we had to work extra carefully.

Circus Family was approached by the agency XXS in charge of the commercials and campaigns for Hema (one of the most well-known department stores in the Netherlands) to come up with a design for the ‘Sintersizer' concept (a wordplay on synthesizer and Sinterklaas: a Dutch children's celebration). With this concept children are able to create their own Sinterklaas song with the help of a giant music machine consisting entirely of Hema products.

What were some of the technical and artistic challenges to creating this installation?

We tried to combine the design of the Sintersizer with real functionality. That’s why it was nice that we had the freedom of doing the actual designing, building, interaction design and technical implementations.

The technical challenges lay in bringing together all of the different input types divided all over the machine, making sure the interaction made sense and was doable (and fun!) for children. However, we also had to make sure the whole machine was strong enough to last a longer period of time: finding a balance between the durability and ease of use took a lot of trying out and adjusting.

In the end for the technical aspect we used hardware that basically turns buttons into MIDI. This way Vuo took in one MIDI device, which already contained the 44 different inputs. In Vuo we used and conditioned all this MIDI data to control samples in Ableton Live and to trigger content in Resolume Arena for the LEDs. Also, the audio from Ableton was fed back into Vuo to create a VU meter that was responsive to the audio samples triggered.

We ran the installation on two Mac Mini’s, both running Vuo and one running Resolume and the other running Ableton. Because the installation also ran live for a month in Hema’s flagship store in Amsterdam we wanted to make sure we had a back-up system on each system. During this month we had to make a couple of physical repairs but luckily none on the technical side.

Can you tell us a bit more about how kids and adults interacted with the Sintersizer when it was installed?

During the month the Sintersizer was live it took a beating, every day hundreds of children and adults pushing, kicking and hitting all aspects of the Sintersizer. The response was overwhelming though: children were amazed by its size and the immediate feedback all the elements provided which triggered them to keep investigating all the sounds they could add to their song.

What else is on the horizon for Circus Family? What new technologies or directions are you exploring?

We are a family of audiovisual designers with a passion for bringing challenging projects to life, using design, moving image, music and interactive technology. The content we create can be installations, stage designs, animations, and documentaries. We specialize in the field of fashion, music, sport, and luxury. We believe in merging design and technology to tell stories and explore new territories.

A couple of weeks ago we finished an LED lighting project for a club in Amsterdam. We were responsible for the design and visual content and continue to expand the content for this venue.

We’re also optimizing our own tool to control LEDs and video, which is being developed for an installation at the Cannes Lions festival. We’re also pushing our TRIPH art project on different festivals across the globe.

We always try to give our own unique interpretation to a project, exploring the edges of what a client wants and needs. This way projects really become our own.