VJing with Vuo, getting micropayments, and making animations

What's new in the Vuo community? We're shining the spotlight on Anthony Gene Guterac, a VJ based on Santiago, who performed with Vuo at the Sónar festival. We've introduced micropayments, a way for you to get paid for your Vuo artistry and say "thanks" to other Vuo composers. In this post, you'll also find some smooth tips on making animations.

Time to vote on features for Vuo 1.3

You can help pick the features that go into Vuo 1.3 by voting for your favorites. You can improve your Vuo skills with our new tutorials and a tip about the Process List node. And, have you seen the videos of Vuo being used to VJ in a planetarium?

Check out some compositions that sense hand movements with the Leap Motion Controller. If you're a student or teacher, you now get 20% off when you buy Vuo.

Vuo 1.1 is here! — Export movies, talk to serial devices, and much more!

Vote now: What hardware should Vuo support next? Plus: Vuo's processing power tested.

Now that Vuo 1.0 is complete, we're eager to expand what Vuo can do! Please help us prioritize what we develop next by voting in our poll.

We're changing the way we sell Vuo — plus an awesome limited-time discount for you and a friend! 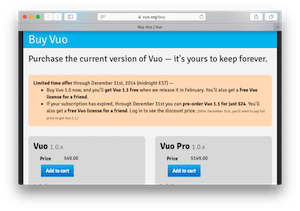 Thanks for helping Vuo reach version 1.0!

You can check out our new Buy Vuo page to see the new deal.

We've released Vuo 1.0! You can download it now (and there's a free trial available!).

We've worked feverishly to deliver several amazing new features and polish everything. Here's some of the new stuff in Vuo 1.0:

We're most excited to announce that Vuo 1.0 is on the way! We expect to release 1.0 on December 10th and here are a few things that will come with it…

Vuo 0.9 comes with 79 new nodes, and over 30 new example compositions to help you learn how the new nodes work. We've added nodes for receiving live video input via QuickTime — including the built-in iSight camera on MacBooks and iMacs. We also have new nodes for filtering images, blending objects and layers, using lists, and controlling the logic flow in your composition.

We added several new features to the editor, like the ability to drag media files directly onto the canvas and have the corresponding node automatically pop up. You can now drag cables backwards and edit published ports with sliders (essential when creating compositions for VJ apps like CoGe), and search for nodes by port names, too.

We've significantly improved stability and live coding performance, and have many more improvements in the works for 1.0.

Hey, it's Travis from Team Vuo. Lots of cool things have been happening since our 0.8 release:

CoGe has released a public beta with experimental support for Vuo compositions! CoGe allows mixing and compositing inputs from a variety of sources, including Quartz Composer, Syphon, and live cameras — and now adds Vuo to the mix.

Here's a video of Vuo + CoGe in action: